An Inland Voyage: Life on the Coventry and Oxford canals 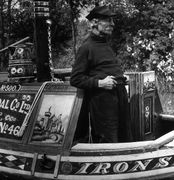 Inland Voyage reveals the remarkable photographic archive of Robert Longden. During the late 1940s and early 1950s he documented an intimate history of a working life now long gone.

The exhibition, which was previously at Coventry’s Herbert Gallery, is the first time that Longden’s photographs have been on display and the stunning black and white images reveal the remarkable photographic achievements of the Coventry factory worker.

During the late 1940s and early 1950s Robert Longden documented and intimate history of a working life which has now disappeared. The photographs record the narrowboat people he encountered on the waterways, catching the moment of transformation which saw canals change from being industrial thoroughfares to locations for leisure.

The 43 photographs have been carefully restored for the exhibition by Longdens great-grandson Stephen Pochin. A photographer himself, Pochin has travelled the towpath to record this area as it is today and his colourful shots make a marked contrast with Longden’s brooding, images of a smoky industrial landscape

RSVP for An Inland Voyage: Life on the Coventry and Oxford canals to add comments!