Behind the Mask: Andy Gotts MBE portraits for BAFTA 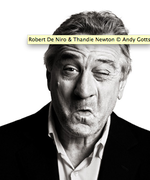 Behind the Mask is a BAFTA Future Archive collaboration with renowned photographer Andy Gotts MBE, a celebrity photographer of 23 years who specialises in actors’ portraits, who together have produced Behind the Mask, a photographic census of over one hundred international actors and actresses to have won or been nominated for a BAFTA since 1954.

The project has been over two years in the making with Gotts travelling across the globe in order to photograph subjects including Lauren Bacall, Jeff Bridges, Daniel Day-Lewis, Al Pacino, John Hurt, Sidney Poitier and Tilda Swinton.

In addition to the exhibition, BAFTA will project every image from the series onto the façade of its headquarters at 195 Piccadilly, London during the weekend of the EE British Academy Film Awards (15 and 16 February 2014) as part of an art commission supported by luxury watch brand 88 Rue Du Rhone.

The exhibition is curated by Anna Allalouf.

Behind the Mask has been made possible by the generous support of the Ruhan Arts Foundation.

RSVP for Behind the Mask: Andy Gotts MBE portraits for BAFTA to add comments!