CFP - Photography and power - 'Daguerreotype. Studies in the history and theory of photography' 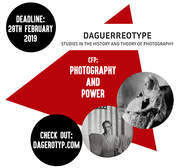 The need to look at the problem of power in a broader way, which would go beyond the context of political domination, has already become strongly present in contemporary humanities. This topic became the subject of interest of the authorities of our academic discourse. Chomsky, however, in the aforementioned statement, also raised a second issue, which is especially important in our attempts to analyse today’s iconosphere: the phenomenon of the so-called ‘fake news’. At this point, his thought meets the observations of Giorgio Agamben. The recognition of the condition of our times made by both scholars is accompanied by the observations regarding the crisis of images. Paradoxically, despite the gradual loss of faith in the image (progressing with the growing awareness of the ways of manipulating it and using it as a means of persuasion) the thesis of Hans Belting, claiming that “we live in images and understand the world in images” still remains in force. After all, armed conflicts and trade wars are followed by the stream of provocative photographs.

in the next issue of “Daguerreotype” we would like to invite you to present your answer to the question of how photographic strategies place themselves in the complicated network of power, history, and memory. Let us ask ourselves what role photography can play in the game between those mighty opponents: is it stronger than only a defenceless pawn?

RSVP for CFP - Photography and power - 'Daguerreotype. Studies in the history and theory of photography' to add comments!