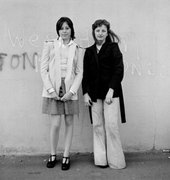 Daniel Meadows was one of a group of photographers who spearheaded the independent photography movement in the early 1970s, breaking with tradition and infusing the medium with new energies and ways of seeing. His practice is complex, passionate and sometimes deeply autobiographical. Between 1971 and 1987, he produced an astonishing record of urban society in Britain, working in a uniquely collaborative way through his interviews with - and writing about – his subjects.

Daniel Meadows: Early Photographic Works encompasses Meadows' major projects, as well as recently discovered work from his archives. The exhibition is accompanied by a book, published by Photoworks.

This project has been funded and supported by a partnership between this Museum, Ffotogallery, Birmingham Central Libraries, Photography and the Archive Research Centre, University of the Arts London and Photoworks UK.

This exhibition form parts of Ways of Looking, a new photography festival in Bradford, 1 - 30 October 2011.