For My Best Beloved Sister Mia: An Album of Photographs by Julia Margaret Cameron 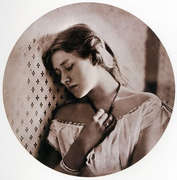 During her lifetime, Julia Margaret Cameron (1815–1879) was recognized as one of the leading photographers of the Victorian era. From the time she received her first camera as a gift when she was 48 years old, she worked to develop the medium and her personal artistic vision. She is now considered to be one of photography’s earliest masters and finest portraitists of the medium.

The exhibition is entitled "For My Best Beloved Sister Mia: An Album of Photographs by Julia Margaret Cameron." This album, made for her sister Maria Jackson (affectionately known as Mia) includes family portraits and allegorical works, such as her famous series on Mia’s daughter, who later became the mother of the writer Virginia Woolf. In addition, the album features images of some of the most celebrated figures of Victorian England—among them the poet Alfred Tennyson and the Pre-Raphaelite painter George Frederic Watts. In addition, Cameron collected work by her colleagues including O. G. Rejlander one of the first to promote photography as an art form and Lewis Carroll, the author of Alice in Wonderland.

The traveling exhibition of this privately owned and rarely seen photographic album is organized by Art 2 Art Circulating Exhibitions.

RSVP for For My Best Beloved Sister Mia: An Album of Photographs by Julia Margaret Cameron to add comments!