In Focus: The Tree 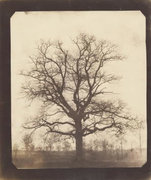 Loosely organized into single tree portraits, trees in the landscape, abstract forms drawn from trees, and daily uses of the tree, the exhibition highlights photographers from different eras, juxtaposing their works to create an interesting dialogue, says Lyden. One of the earliest works in the exhibition is William Henry Fox Talbot’s iconic An Oak Tree in Winter (1842-1843), which captures the lace-like pattern of bare branches against a stark winter sky.

Also included in the exhibition is Simryn Gill’s large-scale photograph Forest (1996-1998), which conceptually explores issues related to identity and a sense of belonging to a particular place. Selecting books for their meaningful narrative or graphic type, Gill deconstructs the literature, ripping up the pages to create organic forms that twist around tree trunks, playing with the idea of family trees, ancestral roots, and the essence of nature.

A daguerreotype by John Jabez Edwin Mayall from 1851 entitled The Crystal Palace at Hyde Park, London, captures the site as it appeared when new, an impressive glass structure built around existing Elm trees. Mayall’s image shows man’s progress in using modern materials such as glass and steel in an attempt to surpass nature and showcase science and industry.

On view for the first time since entering the Getty’s collection in 2009, South Korean photographer Myoung Ho Lee’s works, Tree #3 and Tree #11, document trees in the landscape silhouetted against a large drop cloth, sometimes hung as high as 60 feet. The tree is shown in stark relief, while still surrounded by its natural environment. The images simultaneously recall the formal portrait studio and acknowledge the landscape tradition within art history.

In Focus: The Tree is the eighth installation of the ongoing “In Focus” series of exhibitions, thematic presentations of photographs from the Getty’s permanent collection. Three of the works in this exhibition, the Gill and Lee images, were acquired with funds from the Getty Museum Photographs Council.

In conjunction with In Focus: The Tree, a book by co-curator Reynaud entitled The Tree in Photographs will be published in January 2011, and will expand the theme of the exhibition. The book will include all of the images featured in the display, as well as many others.

RSVP for In Focus: The Tree to add comments!