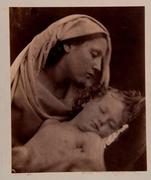 Hans P. Kraus Jr. Fine Photographs, New York, will present Julia Margaret Cameron and Other Early Portraits at Paris Photo from 10-13 November 2011. The exhibition honors the fair’s move to the glass-domed Grand Palais, as the 19th century British photographer Julia Margaret Cameron (1815–1879) worked in her own glass house, a former greenhouse, which served as her studio at her home on the Isle of Wight. More than 30 photographs will be on view, featuring work by Cameron and such early masters as William Henry Fox Talbot, Roger Fenton, Oscar Gustav Rejlander, and others.

The earliest portrait on view will be William Henry Fox Talbot’s calotype negative, Charles Porter and another man seated at a table with an urn, c. 1842-1843.

RSVP for Julia Margaret Cameron and Other Early Portraits to add comments!