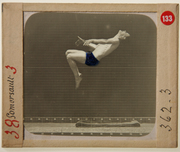 Eadweard Muybridge was one of the world's most innovative and influential photographic pioneers. Undertaking extensive studies of humans and animals in motion, his influential body of work played a critical role in the history of photography and the moving image, with his contribution to art and science enduring as a source of inspiration into the 21st Century.

This autumn sees the launch of two brand new Muybridge in Kingston exhibitions, staged in Eadweard Muybridge’s hometown of Kingston upon Thames, running in parallel to a major Tate Britain retrospective on Muybridge’s pioneering work.

Muybridge Revolutions (18 Sept- 12 Feb 2011) opens almost exactly a century after the first ever Eadweard Muybridge exhibition at Kingston Museum. Supported by the Heritage Lottery Fund and other partners, this exhibition focuses on Muybridge’s unique projection device, the Zoöpraxiscope, and its relation to the history of the moving and projected image. It is privileged to be able to draw on Kingston Museums’ world class collection of Muybridge material bequeathed by the artist himself, which includes 68 of the 71 known Zoöpraxiscope discs worldwide - a stunning collection never before exhibited as the focus of a major exhibition and rarely seen by the public.

Contemporary Commissions at the Stanley Picker Gallery celebrates Muybridge’s lifetime's achievements through the eyes of two contemporary artists who have been given privileged access to rare material held at the Kingston Museum archives.

RSVP for Muybridge in Kingston Exhibitions to add comments!