Perplexity and Embarrassment: Photography as Work 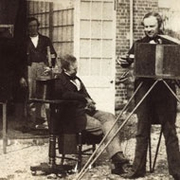 There are a few honorable exceptions, of course, but in general the literature on the history of photography has tended to avoid discussion of the tawdry commercial side of the photographic industry, to repress even the notion that photography is an industry. This repression, another sign of the dominance of art history as a way of talking about photography, is faithful to nineteenth-century prejudices, when there was a concerted effort to associate photography with those "in society" rather than with those "in trade." It is time to overturn this prejudice and consider the degree to which a history of photography should be based on a business, rather than a fine art, model. In short, we need to think of photography as a form of work and the photographer as a worker if we are to ever grasp the full complexity of the photographic experience.

After some brief remarks about the present and recent past of photographic labour, this paper will go back again to the beginnings of photography, a moment long framed by the preoccupations of Romanticism, in order to reconsider this new phenomenon within the economic, social and political contexts of industrialization and consumer capitalism. Particular attention will be paid to Henry Talbot's effort to establish a photography business in Reading in the 1840s, and to the competition he faced from the daguerreotype studios operated by Richard Beard and Antoine Claudet, both established in London in 1841. From this consideration, an alternative model of photographic history will be proposed, a model with implications for our understanding of photography's past, but also its present and possible futures.

Geoffrey Batchen is a Professor of Art History at the Graduate Center of the City University of New York. His books include Burning with Desire: The Conception of Photography (The MIT Press, 1997); Each Wild Idea: Writing, Photography, History (The MIT Press, 2001); Forget Me Not: Photography and Remembrance (Van Gogh Museum & Princeton Architectural Press, 2004); and William Henry Fox Talbot (Phaidon, 2008).