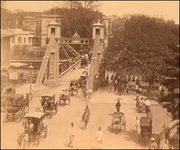 Gustave Richard Lambert arrived in Singapore in 1875. setting up a photographic studio on Orchard Road. He photographed extensively in the region and produced some 3,000 photographs of Singapore, Borneo, Malaya, Siam and China.

Dates of his travels to these locations is unknown. Lambert and Co also had studios in Deli, Sumatra and Kuala Lumpur, Malaya. Another in Bangkok, Siam and the firm was by appointment to the King of Siam as well as the Sultan of Johore.

Photo: A photograph of Cavanagh Bridge in 19th century Singapore.

RSVP for Photos & Postcards: The Originals of G.R. Lambert to add comments!