Picture This! One Hundred Years of Photography 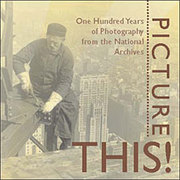 Picture This! chronicles major events of the twentieth century -- immigrants arriving at Ellis Island, the Wright Brothers' first flight, construction of the Empire State Building, Depression-era soup lines, Omaha Beach, the mushroom cloud, Lyndon Johnson taking the Presidential oath, U.S. Marines in Da Nang, and footprints on the moon. Some of these images are so famous that they are seared in our collective memory and have become synonymous with the events themselves. Other photographs offer us surprise historical glimpses from the past, and still others chronicle the changing technological landscape over the century.

Drawn from the National Archives and Records Administration vast archives of more than 8 million images, Picture This!: One Hundred Years of Photography from the National Archives features color and black and white photographs celebrating 100 years of American life. The exhibition is arranged chronologically and depicts many of the momentous events of the century, as well as larger social trends. The initial section on the early twentieth century, for example, includes historic photographs of the Wright Brothers' first airplane flight, an early automobile assembly line, and immigrants arriving at Ellis Island in New York City. From the era of World War I and the 1920's come images of a Liberty Day celebration, rural life, and the construction of the Empire State Building. Views of the Great Depression and New Deal include the effect of the Dust Bowl, public works projects, and the plight of migrant workers.

RSVP for Picture This! One Hundred Years of Photography to add comments!