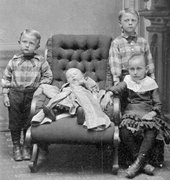 In partnership with the Burns Archive, publishers of the award-winning photo book "Sleeping Beauty," the Merchant's House Museum will present an in situ exhibition of 19th-century post-mortem photographs and modern art inspired by the iconography of these historic images.

Open September 9 through November 29, the exhibition will include historic prints and daguerreotypes from the Burns Archive collection that have never been shown in New York City. Featured modern artists include Joel-Peter Witkin (courtesy of Bruce Silverstein Gallery) and Hal Hirshorn. Visitors will be encouraged to stage their own "post-mortem" photographs in a reproduction coffin, highlighting our changing relationship to personal images in the age of digital photography.

With the advent of photography in the 1840s, Americans began to memorialize their loved ones in post-mortem photographs. Though more accessible than a painted portrait, 19th century photography was still expensive and required specialized skills and equipment, so personal images remained relatively rare. It was not unusual for the only photograph ever taken of someone to be after death.