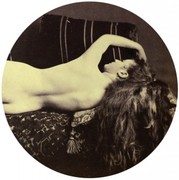 “We are only beginning to assess early photography’s profound impact on the Victorian view of the world and to describe its locus in an art historical context” – Robert Hershkowitz, The British Photographer Abroad, 1980.

This exhibition explores the role of reminiscence in the artworks of several noted historical authors: Maxime Du Camp, Charles Nègre, James Anderson, Eugène Constant and Giacomo Caneva, amongst others. The exhibition engages with a particlar and crucial moment in the 19th century in which notions of technological development and the speed at which society was moving lead many artists to seek – through photographic image-making, and in contrast to the culture of the time – a sense of calm nostalgia in their photographing which revealed a stasis and beauty inherent in images with often idealistic or Romantic pictorial values. While society was moving forward, these image-makers were calmly setting up early camera technologies and capturing images that quite uniquely looked back to history; its buildings and landscapes; the relationship between the traces of human civilisation and nature itself.

This form of early art-photography held central to its ideal a sort of reminscence, a ‘Rückblick’ (retrospective view): a nostalgia both for history (Du Camps’ images of Abu Simbel, Constant’s “Tempio di Vesta” in Rome) and the documenting of the beauty and romance in form; both in the sense of the female form (the anonymous 1870 image of a beautiful naked woman strewn across a chaise longues) and in the curving form of the natural and architectural landscape (Pyne’s “Landscape” (1855) and Nègre’s “Asile Impérial de Vicelles” of 1859/9). This was the great era of photographic exploration, as an art form, and in a mode which both harked back to the architectural icons of past cultures, whilst capturing slowly and calmly, a moment in the history of humanity that, paradoxically, was both fast and highly-pressured.