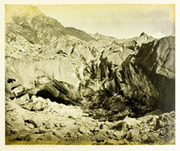 The work of 19th Century photographer Samuel Bourne was on display at Bromley House Library in Nottingham to mark the centenary of Samuel Bourne’s death. The exhibition is moving to the gallery area at the College and will be open to the public from 27 September to Thursday 27 October. Entrance is free of charge.