Writing in the Sand 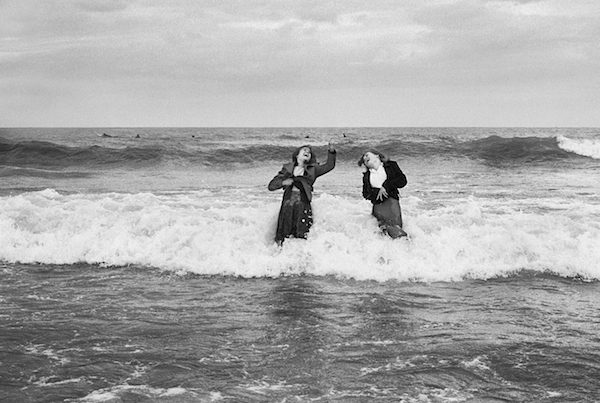 L. Parker Stephenson Photographs presents Writing in the Sand, the fourth solo exhibition by gallery artist Sirkka-Liisa Konttinen (b. 1948). For well over a decade, beginning in the late 1970s, Konttinen documented the seashore as a year-round destination of leisure for English people of all ages. From these exuberant black and white photographs the project spanned an exhibition, book, and award winning film.  The prints on view, made by the artist in 1990, are the earliest any of Konttinen’s photographs to be offered for sale.

Celebrating working class citizens of north east England has been Sirkka-Liisa Konttinen’s life’s passion. As with all of her oeuvre, children, adults, the elderly (and canine) are presented here with equal affection.  Engaging in pensive, boisterous, humorous, amorous, solitary and collective activities each delights in the pleasures of sand and sea.

The Writing in the Sand film was produced by Amber in 1991 using 400 of Konttinen’s photographs. It has been screened at the Tate Modern, San Francisco Museum of Modern Art, the Centre Pompidou (which acquired the film for its permanent collection), in addition to sites in Canada, Germany, Hungary, Switzerland, and New Zealand. The Writing in the Sand exhibition traveled to twelve venues across six countries in Europe between 1991-2001. A limited number of out of print Writing in the Sand books (Dewi Lewis, 2000) are available through the Gallery.

On the occasion of this exhibition, we are further thrilled to share a short film of Konttinen’s daily morning routine at one of the beaches where she photographed. This joyous homage was produced this year by Peter Roberts, her filmmaker husband and Amber colleague.

RSVP for Sirkka-Liisa KONTTINEN "Writing in the Sand" Exhibition to add comments!