The Queen: 60 Photographs for 60 Years 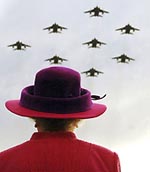 Sixty photographs of The Queen, including the work of leading press photographers of the past six decades, are brought together for a display at Windsor Castle to celebrate Her Majesty’s Diamond Jubilee. The exhibition presents a portrait of The Queen’s reign as captured in fleeting moments on both official occasions and at relaxed family gatherings.  With the advent of photography, the boundaries between the officially approved and the spontaneously captured image of the monarch were irreversibly blurred.  Today, through the reach of modern media, the image of Her Majesty is familiar to millions around the world.  Most of the exhibition The Queen: Sixty Photographs for Sixty Years has been selected from photographs submitted by the Royal Rota press organisations.

RSVP for The Queen: 60 Photographs for 60 Years to add comments!