Firstly, thank you to all the creators and contributors at British Photographic History for this forum.

I'm wondering whether anyone here has heard of the photographer Maud Shelley (1875-1952) who had a studio in Wimbledon from at least the 1920s (quite possibly much earlier)? She was the great-niece of the poet Percy Bysshe Shelley and won several prizes and honorable mentions for her work, including Fifth Prize (out of 1,172 entries from 360 competitors) in American Photography's Second Annual Competition (1922) for "In the Hills of Ceylon":

"A fine bit of work, showing delightful quality and very pleasing atmospheric perspective. Made with a Lancaster half-plate camera fitted with an Aldis anastigmat lens of 8 inches focal length. The exposure, at 9.30AM in November, with sunlight, was two seconds at f:32. The orthochromatic plate, used with a yellow screen, was developed in pyro-soda and printed on Royal."

Among her famous subjects were Gwen Lally and Sir Fenton John Aylmer (the picture is held by the National Portrait Gallery): https://www.npg.org.uk/collections/search/portrait/mw161449/Sir-Fen...

She is possibly shown in a group photo on page 293 of the British Journal of Photography vol. 79 - might anyone here have access and be able to check?

Any further details or examples of her work would be greatly appreciated! 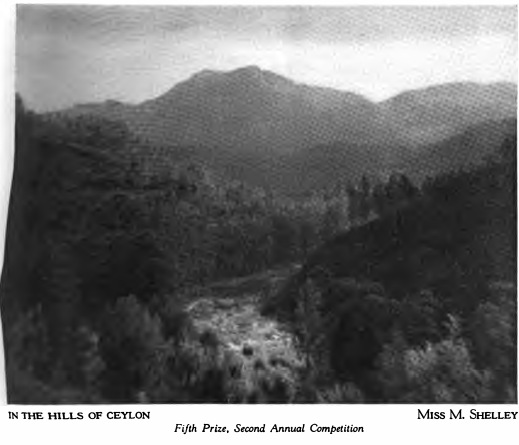 The first reference I can find is her exhibiting at Plymouth Photographic Society in 1902 she received a bronze medal for Reflections; and a silver medal for Evening of Life. My Old Sun Bonnet at Southampton Camera Club the same year. She was a prize winner in the Ilford £750 competition of 1905.

She was a member of the PPA by at least 1925, probably earlier, and attended its 1925 Congress (and was shown in the group photo). In 1925 she advertised for a receptionist, retoucher and finisher (her address was 2 Harrington Gardens, London, SW7) and later for an 'experienced lady printer' from her address at 91 High Street, Wimbledon.

In 1925 she was elected to the committee of the Surrey and District Professional Photographers' Association. In 1926 she wrote a letter to the BJP stating that she didn't give free sittings. She had five works in the PPA's All-British Exhibition in 1926, and in the 1928 exhibition, and 1929 exhibition where she exhibited a portrait of Gwen Lally, Producer of Plays. She also had The Derelict  in the 1931 exhibition. She stood for the Council of the PPA in 1931 but was not elected.

Maud also exhibited in the 1902 RPS Annual The Evening of Life.  A portrait of Mrs Edward Cowan was in the RPS Annual exhibition in 1920. Her address was given as Anstey, Hill View Road, Woking. And in the 1933 Annual a work entitled Crinoline (Carbro).

Warm thanks for your very informative response.

Maud wrote a further letter to the BJP in 1934 criticising the absence of hands in most photographic portraits. I could access the text via Google but would be wonderful if you or someone else on here could show any examples of her work.

I’d be particularly grateful to see the photo of Maud herself in the PPA’s 1925 Congress group shot.

A final query, to help put her career in context: was it still so uncommon in her day for women to be professional photographers?

Many thanks again for the kind help.

The PPA congress group shot is attached and below. The BJP paper is very poor quality.  Maud Shelley is on the second row from the top, the taller woman, second from the left. I have also attached it as a file so you can download. it. PPA%201925.jpg 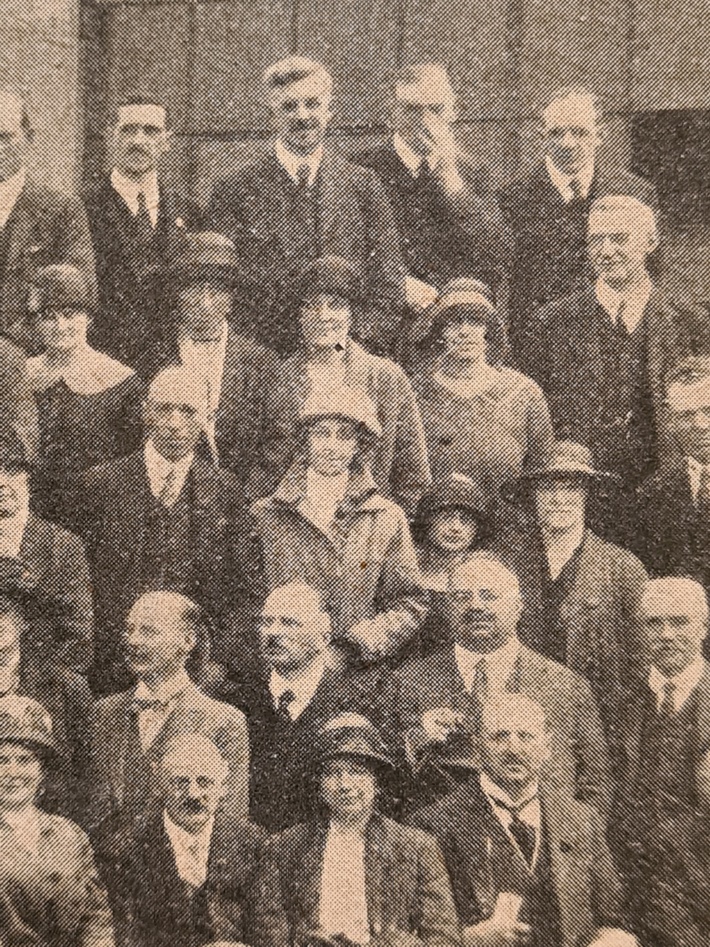 Brilliant so many thanks Michael!

Hi, I have been working on a dictionary of women portrait photographers in national collections 1840-1949 and this is my entry for Maud Shelley :

Maude Shelley was born into aristocracy in 1875 the daughter of Lt Col Sir Charles Shelley 5th Baronet Shelley of Goring and Lady Mary Jane Jemima Stopford. She was one of nine children. She grew up on her family’s estate Avington Park in Hampshire and was so highly connected she was invited with her mother to Buckingham Palace to a “drawing room” hosted by Princess Christian of Schleswig Holstein on behalf of the Queen. In 1901 she exhibited watercolours and photographs she had taken with a brownie camera at a charity exhibition, and in 1902 she exhibited “The Evening of
Life” at the Royal Photographic Society alongside another bromide print “Reflections”. She submitted these two images for copyright in the same year. The National Portrait Gallery holds one of her portraits of Sir Fenton John Aylmer taken in the 1920’s. She died in Surrey in 1952.

Hi Vivien, thank you for your reply. Could I ask for your source for the "drawing room" anecdote?

hI, Vivian. See more exhibition details in my earlier post to Daniel. Also, Brownie should be a capital B