For those BPH members with a taste for the Orient, you will be pleased to know that The Getty will be holding two special exhibitions in the near future.
The…
Continue

Among the most anticipated lots of a recent auction in Texas was a half-plate ambrotype of “The Gallant Pelham,” a native Alabamian… Continue

village green since 2009. With its claim to be “probably the smallest art gallery in the world” it shows nothing larger… Continue

Any BPH members carrying out research in this area will be pleased to know that there is a talk on British photographers who came to British Columbia in the 19th century. These early pioneers were there not only to record events, locations and people, but also to promote investment or immigration. 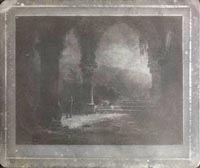 photographer Spain has ever come across. He was not a prolific photographer as such as his total production consisted of only a few hundred negatives. But he was one of the few early photographers in Spain with a consistent artistic flare and masterful technique… Continue

A collection of images which include the War of Independence, the Civil War, Home Rule meetings,

British soldiers parading in Sarsfield Barracks, and meetings of the Irish Volunteers in the early 20th century will be on display for the very first time.

That's Lady Shallot to you and me! (not the gaga type).

Taken by one of Victorian pioneers of photography, Henry Peach Robinson of Tunbridge Wells, the image is made from two separate negatives illustrating a scene from a poem by Tennyson.
The Lady of Shallot is set to go on an international exhibition which…
Continue

images of life in and around Wick between 1863 and… Continue

The image was considered to be one of the finest examples, if not the most famous, in the history of

daguerrean photography. Taken in 1848 by Charles Fontayne and William Porter, it was a panorama spanning some 2 miles of the Cincinnati waterfront. They produced it using eight 6.5 by 8.5inch… Continue

As part of the East London Photography Festival, there will be a Photofair with over 100 stalls selling

photographs, books, prints and other services. It will be held this coming Saturday 9th October at the Spitalfields Traders… Continue

If you'd missed out on the first installment of this auction as mentioned in an earlier blog, fear not, as

the second lot is now online from today until 26th October. This second collection will… Continue

It has been said that Sean Sexton's collection of Irish photos is one of the greatest in the world. The

critically acclaimed Sexton collection has been published in several books, including The Irish: A Photohistory (Amazon link on the right: ISBN-10: 0500510970)… Continue