Did Roger Fenton pose as a French Officer in one of his Crimean Group Portraits? 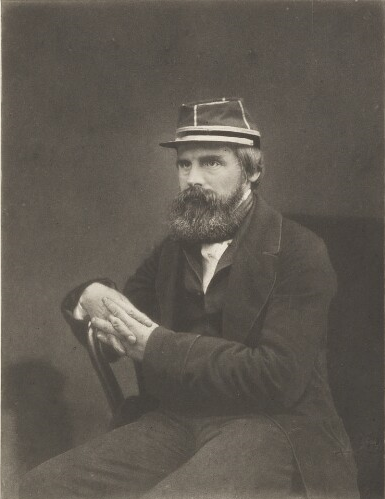 This is my third recent post that concerns Roger Fenton and his Crimean War connections. In the first, I showed images of his first photographic van that I discovered on landscapes that he took of the British cavalry camp near Kadikoi in the Crimea in 1855. In the second, I suggested that Fenton’s second photographic van was the one photographed at a Photographic Society outing to Hampton Court in 1856. In this post, I argue that Fenton most likely posed mischievously in one of his own group portraits taken in the Crimea in 1855.

The portrait of Roger Fenton on the right was taken by Hugh Welch Diamond in 1856. He wears a French military kepi that is likely to be the same one as he wore at the Photographic Society outing to Hampton Court the same year. It was probably one of his prized possessions from his time in the Crimea. I noticed the same style of kepi (with an almost invisible peak) on the man standing third from the right in an image entitled General Cissé, with Officers and Soldiers in General Bosquet’s Division (see below). The man in question looks remarkably like Fenton. So much so that I strongly believe that it is Fenton. His jacket and the shade of the trousers are also very similar to those that Fenton wore one year later at Hampton Court.

After breakfast yesterday I went there ie to Bosquets & I soon got all the staff round me wanting a trial of my skill. I made a group with Genl Cissey (sic) the chief of the staff in the centre.

‘I made a group…….’ is ambiguous in that it could mean that he was one of the group! Did Marcus Sparling, who was Fenton’s chief assistant and photographic van driver in the Crimea, in fact take this photograph?

General Cissé, with Officers and Soldiers in General Bosquet’s Division was shown in Fenton’s Crimean War exhibition held in London in 1855 as photograph No. 128. I wonder if anyone viewing his works at the time though that they recognised Fenton in the image? The photograph, which I believe shows Fenton in a group portrait, is entitled General de Cissey, Henry, Lourde and the artist Protais, with soldiers of General Bosquet's Division by the Royal Collection Trust (RCT). I assume that the RCT copy of the image and its more informative title was given to Queen Victoria by Fenton himself, as he has spelt 'Cisse' as 'Cissey' as he did in a letter to his wife dated 6 May 1855.

Paul Alexandre Protais was a French painter of military scenes and battles. He visited the Crimea and was attached to General Bosquet's Division. I presume this is the gentleman in civilian clothes sitting on the left. As Fenton was also an artist, I can imagine that he wanted to include himself in the photograph.