David Johnson was a Blackburn based amateur, later professional, photographer who was active in the 1850s and 1860s. Whilst examples of his later studio work survive as carte de visites, I’m interested in establishing whether more examples of his earlier topographical studies have survived the intervening years.

Some of his photographs were exhibited at the 1855 exhibition in Amsterdam. I know from reports in the local press that he obtained an “honorable mention”, but not which prints were exhibited; does anyone know if a catalogue exists?

Eight of his photographs were exhibited at the Photographic Society’s exhibition in London in 1856. Five came from a trip to North Wales, three were taken closer to home.

Some of these Welsh views were also exhibited that May in Manchester. A report of the Manchester Exhibition appeared in the Journal of the Photographic Society, which said that “Some of Johnson’s are first rate specimens, Aberglaslyn Pass and the American Barque, Conway Bay, are perhaps the best; the latter stands really alone as a coast scene.” A salted paper print of his photograph of that ship, the Jane Tudor, survives in the collection of the Metropolitan Museum of Art, New York: 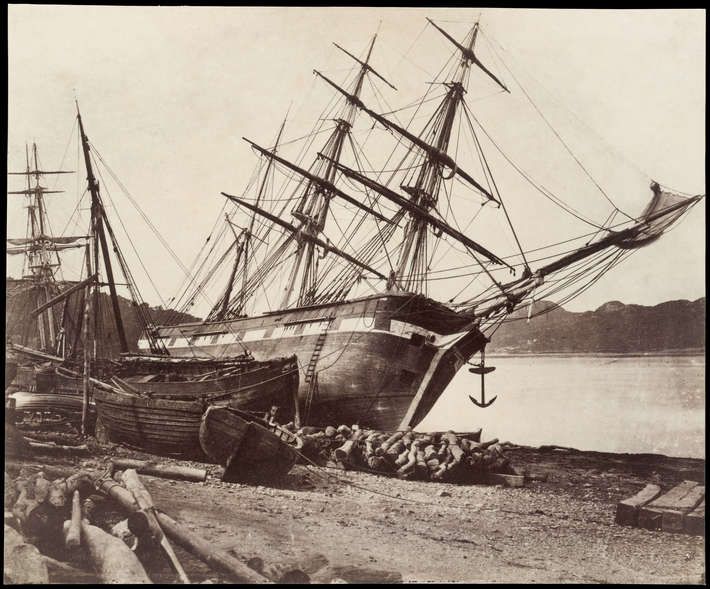 These Welsh scenes also attracted the attention of Thomas Sutton and we know from advertisements in his Photographic Notes that in 1856 one of Johnson’s photographs was included in issues 2 and 4 of Sutton’s short-lived publication “The Amateur’s Photographic Album”. Again, I would be interested to know if, and where, copies of that publication exist and can be consulted.

I hope that other members of BPH may be able to enlighten me. Many thanks.

Thanks for clarifying the translation Steven, again much appreciated. Regards Rob.

Gezicht in this context means a view. So it’s a view of either a (court)yard or a wharf.

Steven, Thanks for the link to this article, much appreciated. I've tried various machine translations online and I'm having difficulty with  the "Gezigt" in "Gezigt op eene werf". I'm wondering if it could refer to the Jane Tudor photograph. Are there any Dutch members of BPH who could assist me? Many thanks.

The six prints that Johnson displayed at the 1855 Amsterdam exhibition are itemised in Mattie Boom’s article « De Amsterdamse fotografietentoonstellingen van 1855, 1858 en 1860 ». It is accessible online at http://journal.depthoffield.eu/vol14/nr28/f05nl/en