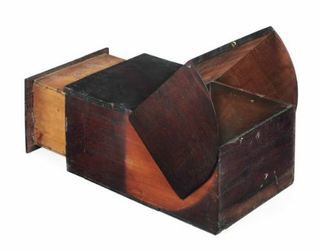 Christie's is offering in an auction of Travel, Science and Natural History on 25 April 2012 a camera obscura 'associated with' Nevil Story-Maskelyne, an early photographer who was close to Henry Fox Talbot and his circle.  The catalogue text reads: There is more on Story-Maskelyne here: Lassam, Robert E, 1980, ‘Nevil Story-Maskelyne, 1823-1911‘, History of Photography, vol.4, no.2, pp.85-93. As Luminous-Lint notes: He was a part of the social circle surrounding Henry Fox Talbot who gave him permission to learn the calotype process and he was taught by Talbot's operator Nicolaas Henneman.

Noel Chanan writes: The camera obscura described as 'associated with' Nevil Story Maskelyne is in fact of the eighteenth not nineteenth  century. It's first owner was Nevil Story Maskelyne's grandfather, the astronomer royal, from whom it descended to Nevil Story Maskelyne. It was previously offered for sale by Christie's, lot 301, 18 June 1981, when it failed to sell. It'll no doubt do better this time - it's a real collector's piece.

Nevil Story-Maskelyne was educated at Wadham College, Oxford, and became Professor of Mineralogy, 1856-95.The family adopted the name of Maskelyne on Nevil's coming of age as they had inherited that family's estate at Basset Down in Wiltshire. He was Member of Parliament (MP) for Cricklade as a Liberal, 1880–1886, and as Liberal Unionist, 1886 - 92. He was also a founder member of the Swindon Camera Club, now the Swindon Photographic Society.