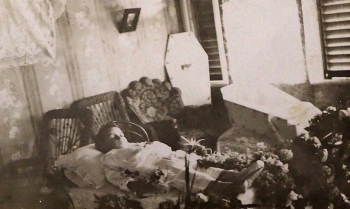 Stephen Furniss will talk about Victorian photography in general, but concentrate on the many Victorian photographers who are buried in Highgate Cemetery. Some of these were instrumental in making photography accessible and hugely
popular. Among those included in the talk will be Antoine Claudet, who was a leading expert in the Daguerrotype process and is attributed with inventing the red safelight, the Watkins brothers, who photographed over 1,500 celebrities, James
Perriman, a studio photographer who went to prison for displaying another photographer’s work outside his premises, and Valentine Blanchard, who took instantaneous photographs of London streets from a disguised van...

Stephen Furniss was an antiques dealer, is a longtime supporter of Highgate Cemetery and is an expert on Victorian photography and related subjects. The memorial photograph shown is from his extensive collection.

If you have any Victorian photographs you would like Stephen to look at for identification and dating, do bring them along with you.

Hi - Wish I could be there.  I certainly hope he includes Francis Bedford.  Not much left of his grave, but he's there.  Below is link. "undefined", but it is Bedford.    Also thanks for offering to help identify the gentlemen in my group portrait from the RBS album(s).  Not sure if my message reached you after your kind reply.  Best wishes, paula fleming     undefined