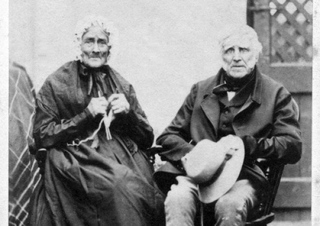 That's what one might encounter when trying to research one's family tree, especially names, as most of us only change our surnames on marrying, say, or by reverting to a maiden name on divorce. For example, in the cabinet photo on the right, it’s assumed that the elderly couple belonged to Jarrow, as that was the address of the photographer, called Whinfield. For the younger pair in the photo below, it's assume, were Shields folk, as behind the camera in this instance was Robert Carling, whose studio was in King Street. 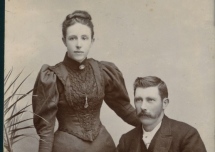 In Victorian times, changing your name was very difficult as the strict marriage laws made it almost impossible to get a divorce. According to an expert in family history research, “One of the easiest options to get out of marriage was to desert your partner, so don’t just assume that if a person appeared on the 1881 census and not on the 1891 census that they had died, especially if you can’t find a death between those years.

If you find all this rather confusing, but might help with your photographic research, then do attend a fascinating series of talks coming up in South Shields, sponsored by the South Tyneside branch of the Northumberland and Durham Family History Society (NDFHS), in partnership with the Local History Library. The first, next Wednesday, January 18, is on William Dring, who was born in South Shields and who was one of the first convicts to be transported to Australia. The talk, by the NDFHS’s John Stobbs, also promises to be useful in that it will provide information on how to access online information, other than parish records, before state registration, and will give a short overview of the criminal justice system in the 18th century.

William Dring and Other Australian Convicts takes place at South Shields Library Theatre next Wednesday, from 2.30pm to 3.45pm. Admission is free. For further information contact the Local Studies Library on 0191 424 7860.