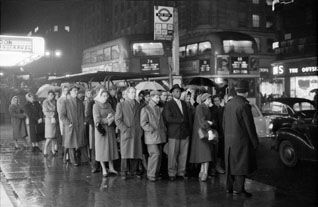 While Collins’ portfolio was dominated by portraiture, from stars of the screen to eminent artists, this new exhibition at the Museum of London shines a light on his documentary work, captured as he traversed the streets of London from the late 1940s to the 1960s, and as recently as 1990. The 50 images on display have been selected to show Collins’ acute observational skills when photographing within crowded places, a common theme found amongst the two thousand plus Bob Collins’ images, which the museum holds in its Photography Collection.

The photographs cover a range of subjects - from the London nightlife of the buzzing West End, to the porters of Billingsgate Fish Market during the 1950s. He recorded memorable scenes during the 1960s such as at Wimbledon All England Lawn Tennis Championships, central London in the grip of rush hour and anti-Vietnam protest marches. Collectively, the spontaneity and eye for detail seen in his photographs exemplify the technical and aesthetic talents of Collins’ photojournalism

Observing the Crowd: Photographs by Bob Collins can be seen at the Museum of London, 16 May to 13 July 2014. See: http://www.museumoflondon.org.uk/london-wall/whats-on/exhibitions-d...