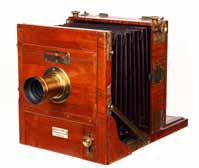 Special Auction Services is holding an auction of cameras on 1 and 2 July 2015 which includes a large collection of British cameras, especially brass and mahogany. Also included is a telescope reputed to be the former property of William Henry Fox Talbot. 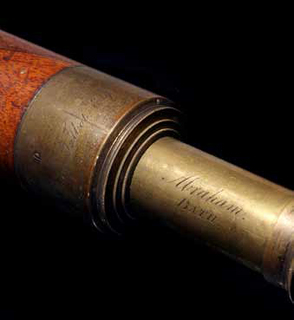 The description reads: An early 19th Century three-draw brass and mahogany Abraham of Bath, 1½in. Pocket Telescope, believed to be formerly the property of the great photographic pioneer William Fox Talbot (1800-1877), engraved ‘William Talbot Esq’ to brass collar ring, with hinged eyepiece dustcap, clear fingerprints to third draw, 550mm long extended, F-G, lacquer worn, objective dust cap missing; although the provenance of this piece is not known, researches have indicated that it is extremely unlikely that anyone else of the same name would have purchased a telescope engraved in such a manner and bought from a source so close to Fox Talbot’s home at Lacock Abbey; it could have been a gift from his stepfather, Rear-Admiral Charles Fielding or Sir John Herschel,a known patron of Abraham’s; the Abraham family were involved in the retailing of early photogenic paper £4,000-£6,000

More details of the cameras and the telescope can be found at the SAS website here.