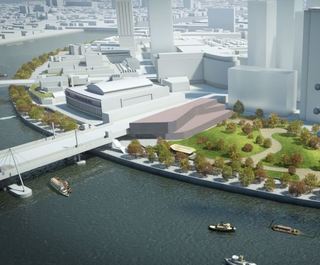 The BFI is at the heart of film in the UK with a network of partners and alliances, filmmakers and audiences that together create an environment where film, TV and the moving image as a cultural art-form and economic driver can flourish. The major new cultural venue on London’s South Bank (on the existing Hungerford Car Park site) will be a flagship national home for this most diverse, influential and rapidly evolving art-form.

The new Centre will be the final piece in the development of London’s South Bank Cultural Quarter reflecting the UK’s worldwide reputation for creativity and achievement in film, TV and moving image. It will fuel the imagination of both the public and industry; giving visitors - from school children to award-winning creatives - new experiences in film whilst providing a hub for filmmakers, artists and industry professionals to meet, exchange ideas, showcase their work and develop skills. 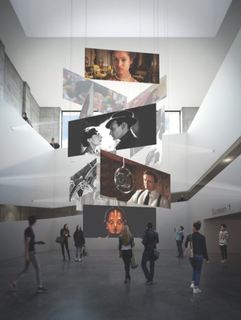 The BFI is currently working closely with the other key landowners (Southbank Centre, Braeburn Estates, Jubilee Gardens Trust and Lambeth Council) and the local community to ensure that the development will be sensitively designed to complement an expanded Jubilee Gardens. The new Centre will occupy a riverside position on London’s South Bank and as part of this development Braeburn Estates will also create c.6,500 sqm of new green parkland on Jubilee Gardens, dramatically extending the current space between The London Eye and Hungerford Bridge.

One of the ambitions for the Centre is to work with the BFI’s existing partners to share content digitally across the UK through a network of nationwide venues that can also host touring exhibitions and programmes and develop pioneering in-venue film education programmes. This builds on the success of the BFI’s UK-wide strategy, including its VOD platform BFI Player, the BFI Film Audience Network (FAN) and a national film education programme through Into Film.

The new Centre has been welcomed by London Mayor Sadiq Khan and Leader of Lambeth Council Lib Peck and has been embraced by industry figures including Lord Puttnam, Idris Elba, Helen Mirren, Gugu Mbatha-Raw and Tom Hiddleston, amongst others. The Mayor of London, Sadiq Khan, said: “London is home to some of the world’s finest arts and cultural organisations, one of which is undoubtedly the BFI, an internationally renowned centre for independent cinema. These plans for a new state-of-the-art building offer a fantastic opportunity for the capital’s moving image artists. As well as strengthening London’s position as a global leader for the creative industries, the centre will create a new generation of TV and film lovers and give Londoners of all ages the chance to experience film and its amazing heritage in the UK.”

Amanda Nevill, BFI CEO said: “British film and British filmmakers deserve a home now more than ever, a building that will express our optimism, our confidence and our excitement about Britain’s leading role in the future of film, television and the moving image at home and internationally. It will be a place where filmmakers and audiences will come together to be inspired by our creative legacy and to be part of this most fast moving, dynamic and popular art-form.”

Lord David Puttnam said: “British film and TV is the envy of the world. We combine being at the forefront of the latest innovations in technology with a legacy of over 100 years of filmmaking driven by an extraordinary and seemingly endless pool of talent and creativity. Why then do we still not have a 'home' that reflects this? Tate Modern, The Royal Opera House, The National Theatre, The British Museum – every other major art-form have buildings to be proud of and which support their role in delivering culture to the world. This is what British film and TV have long needed and deserved – it’s also the initiative I've waited my whole life to celebrate!”