Mr Porter organised a dinner for photographers from Wiltshire and beyond at The George Inn in Lacock last Thursday to kick off his campaign. Fox Talbot is considered to be one of the founding fathers of modern photography and 2010 is the 175th anniversary of the year that he created the first photographic negative.

About 45 people attended the dinner, held just before the Fox Talbot museum reopened to the public following a revamp on Saturday. Museum curator Roger Watson also attended. Mr Porter said: “It was a celebration dinner and we hope to have it every year. I would like to see February 11 called Fox Talbot Day in recognition of his importance to modern photography.”

Among the guests at the dinner were Fox Talbot’s great-great-granddaughter Janet Burnett Brown and John Taylor, the great-great-grandson of Joseph Foden, the carpenter who made the first camera for Fox Talbot. The George Inn’s restaurant was built on land that was once Foden’s carpentry workshop. 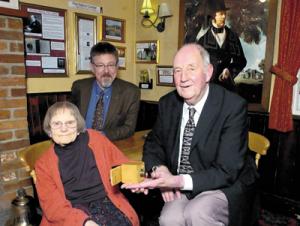