eBook: 'Catchers of the Light' - A history of astrophotography 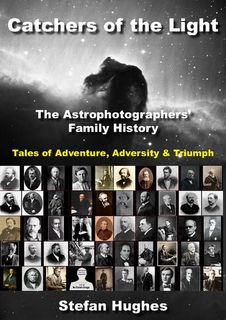 I am writing to you about a book I have just completed after six years of research and writing. It is called the Catchers of the Light and is a History of Astrophotography and tells the story of the 46 men and women who did most to master the art of celestial photography as it was known during its early days; and whose pioneering efforts have made it possible for us to see (and indeed take), the many magnificent pictures of the heavens featured in books, magazines and on the internet.

It is the first fully researched book and the subject, since that of Gérard Henri de Vaucouleurs’s ‘Astronomical photography: from the daguerreotype to the electron camera’, published in 1961. It has been written for the many people who are interested in Photography, History, Astronomy, and interesting true stories.

In its 1556 pages and 1800 photographs/illustrations can be found much new information on all of the pioneers, and in many cases, the chapters represents the very first biographies on the pioneers featured.

Each chapter of the book is devoted to a particular Astrophotographer(s), and includes ‘Snippet Panels’ and over References/Notes, which contain background information on subjects and people relating to their life and the sources of information used in telling their story.

The book has been further divided into nine self-contained parts, each devoted to a particular aspect of the history of astrophotography and the pioneers who contributed to it. Each part ends with a ‘Summary’ chapter which brings together the ‘threads’ discussed in the chapters on the individual pioneers.

A number of Appendices are included which contain more detailed information on topics such as the chemistry of photographic processes, telescope optical systems, and the Charge Coupled Device (CCD).

A timeline summarizing the historical development of Astrophotography is also to be found as an Appendix, as is an ‘A List’ of 109 of the most important astronomical photographs, and a number of simple but useful formulae used in Astrophotography.

A Glossary of Terms used in the book is included in an Appendix. Finally, a ‘Family Pedigree’ for each Astrophotographer is provided for those interested.

The Catchers of the Light is a collection of true tales of adventure, adversity and ultimate triumph.

Although it is about a technically difficult subject, it is not written in the style of a dull and dreary textbook; but presented as a family history that will have an appeal to a wide audience.

The style although scholarly is nevertheless equally suitable for the general laymen who wish to learn about the ‘Catchers of the Light’ the small band of ordinary men and women, who did such extraordinary things; overcoming obstacles as diverse as war, poverty, cholera, death, unfriendly cannibal natives and even exploding donkeys; succeeding against all the odds, to bring you the magnificent astronomical images you will see in its pages.

Yet it is not a work of hearsay and anecdotes, but tells the true stories of their lives, based on information obtained from genealogical research into original records, contemporary accounts of the people who knew them and important documents provided by their living descendants.

Read the story of a real ‘Downton Abbey’ and of William Parsons, 3rd Earl of Rosse, who married a rich English heiress for her money, but which eventually became a ‘match made in heaven’. During the Irish Potato famine, he was one of the few landlords who helped relieve the suffering and starvation of his tenants. So much so, that following his death, upwards of 5000 attended his funeral. Yet in all of this he still managed to build a Great Telescope, known as the ‘Leviathan of Parsonstown’, which showed for the very first time what the Universe really looked like;

Or of the Estonian optician, Bernhard Voldemar Schmidt who lost his right hand in a childhood accident when playing with gunpowder, but yet literally single-handedly (and the left one at that!) created a telescope design, which has recently been used aboard the Kepler Space Telescope, to detect two other ‘Earth’ like planets, orbiting a distant star;

Or of William Cranch Bond, who although he could not afford a telescope, climbed to the bottom of a well to accustom his eyes to the dark, and who in later life became the first Director of the famous Harvard College Observatory. And of his son George Phillips Bond, who tried to photograph the ‘Great Comet’ of 1858 and failed, but nevertheless suffered the tragic loss of his wife, baby daughter and father in the space of eleven months - thus adding weight to the ancient superstition that such objects are portents of doom and death;

Or of William Usherwood, a miniature artist and ‘wedding & baby’ photographer, from the village of Walton-on-the-Hill in Surrey, England, who much to the embarrassment of the astronomical community, became the first person to successfully photograph a Comet, beating all the ‘Great’ astronomers of the day with their mighty telescopes, including the ‘Great Harvard Refractor’;

Or the young boy, Edward Emerson Barnard brought up in the cholera riddled slums of Nashville, Tennessee during the American Civil War, who despite having no father, possessing little education and even less hope, grew up to be one of the greatest astronomers of all time, taking a series of magnificent images of our ‘Milky Way’ galaxy;

Or of Albert Taylor, a School Inspector from Birmingham, England, who in 1889 travelled to Angola in West Africa to photograph a Total Eclipse of the Sun. The trip was considered so dangerous, that his expedition had to be accompanied by British Royal Navy Gunboats and an escort of soldiers, due to the presence of unfriendly cannibals;

Or an account, of how a modern digital camera works, by way of a fairy tale, about an Irish Leprechaun called Freckles O’Gold who had his revenge on an eccentric scientist called Seamus Parsons - who had stolen his pot of gold at the end of the rainbow! Parsons invented an LCD (Leek Coupled Device) which he made from square Irish buckets, and operated by an army of pixies called pixels. He used it to collect the rain water (sent courtesy of Freckles), which was ruining his prize leeks; and with it he first saw the iconic ‘Horsehead Nebula’ by making a drawing of it based on the amount of water collected in the buckets.

It is now available as a whole or as individual chapters and parts as eBooks.

A 146 page introduction can be read at:

Extracts can be read on Google Books at:

It can be bought at: