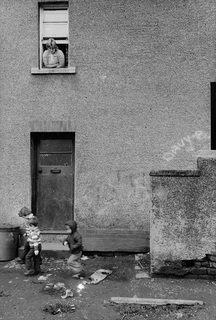 Street Level present this unique exhibition at Paisley Museum. 'Clydeside 1974-76' covers a vast geographical area from Elvanfoot to Stepps, Paisley to Greenock, as well as many rural districts where people worked in farming, forestry, fishing and tourism. This Clydeside was one of the two or three most intensely industrialised regions of Europe and during the mid 70’s was experiencing acute economic decline.

For this exhibition, Herman revisited his original project which, until the recent opening at Street Level, was not seen since it was first exhibited at the Third Eye Centre, Glasgow, in 1976 and in the pages of the London based photojournal Camerawork. For Street Level, he hand printed a new set of 78 Black and White silver gelatine prints. Many of Herman’s work was in the collection of the Scottish Arts Council, now dispersed to various holdings, including Glasgow Museums and Paisley Art Gallery and Museum.

A set is also now held in the collection of the National Galleries of Scotland.