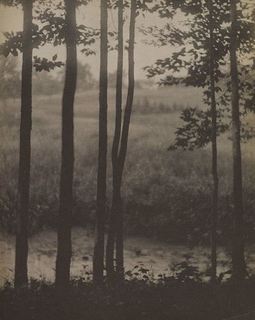 BPH member Pam Roberts has curated a ground-breaking exhibition on A L Coburn. Despite the key role that he occupies in the history of avant-garde photography, Alvin Langdon Coburn (Boston, 1882 - Wales, 1966) remains one of the least known artists of his time. This is principally due to the fact that from 1920 onwards, after he was obliged to leave London during World War I, Coburn embarked on a new life and increasingly focused on mysticism. Deliberately moving away from the world of photography, he made art, music and religion his only interests, although never totally abandoned the practice of photography.

A Pictorialist, a Symbolist and an innovator, Coburn was one of the leading photographers of the first half of the 20th century. Notably influenced by Alfred Stieglitz and Fred Holland Day, two of the most important names in photography of his generation, Coburn can be located at the intersection between late 19th-century Symbolism and a photographic aesthetic associated with the early 20th-century avant-garde movements.

The present exhibition comprises a selection of 180 photographs – most of them vintage prints – which reveal the tenacity and coherence of Coburn’s artistic evolution. Particularly important among the institutions that have collaborated with this event are the George Eastman House in Rochester (USA) and the National Media Museum in Bradford (UK), which possess the most important holdings of the artist’s work. In addition, the exhibition includes images loaned from the Metropolitan Museum of Art and the Museum of Modern Art, both in New York, and from 31 Studio, London, as well as from an important private collection in New York. As a result, this is the first occasion on which Coburn’s most important photographs from a range of different collections have been brought together.

Bravo Pam Roberts for this wonderful and long-overdue comprehensive appreciation of A.L.Coburn (whose life and work fascinated me from the first time I encountered it as a young student of the medium). I can't wait to see the myriad images and bodies of work that I've never before seen or even known about. What a life, from Boston to a man of Harlech. This work of yours will importantly expand our apprehension of the history of photography and Coburn's role. Will it travel? Bien hecho. Trabajo bueno.