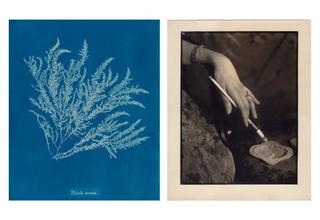 Edinburgh's Stills' presents a two-person exhibition showcasing historically important work by Anna Atkins (1799-1871) and Margaret Watkins (1884-1969), who made pioneering photographic work in the 19th and 20th centuries respectively. All works in this exhibition will be on loan from collections in Scotland.

Fascinated by science and art, Anna Atkins became one of the earliest pioneers of photography. In 1843, she started to produce British Algae; Cyanotype Impressions, the first book ever to be illustrated with photographs. The cyanotype process allowed her to experiment with a new method of accurately depicting botanical specimens in a book.

The modernist photographer Margaret Watkins had a successful career in New York and was active in the Clarence White school of photography before circumstances led to her relocation to Glasgow in the late 1920s. Her work became largely forgotten until, after her death, hundreds of photographs were discovered by her friend and neighbour.