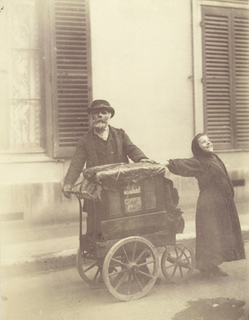 Eugène Atget was not a trained photographer. Instead he only turned to this medium having been unsuccessful in other vocations. Having to earn a living, he took up photography and started out in the provinces but soon arrived in Paris where he lived for the rest of his life. Atget worked anonymously and was considered a commercial photographer who sold what he called “documents for artists”, i.e. photographs of landscapes, close-up shots, genre scenes and other details that painters could use as models. However, as soon as Atget turned his attention to photographing the streets of Paris, his work attracted the attention of leading institutions such as the Musée Carnavalet and the Bibliothèque Nationale, which became his principal clients.