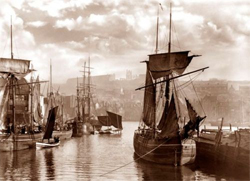 The Scarborough Evening news reports....Images taken by celebrated Victorian photographer Frank Meadow Sutcliffe that have never been seen before have been restored to their former glory.
The Sutcliffe Gallery, in Flowergate, Whitby, owns the rights to Sutcliffe's 1,600 images, which depict people and places around the Whitby area. Now the gallery owner, Mike Shaw, has painstakingly restored 200 of his photographs in time for the gallery's 50th anniversary.

Mr Shaw has spent years restoring the images, which were taken between 1875 and 1910, working on each one by hand using computer software.

Prints are now available for sale at the Sutcliffe Gallery. They range from Whitby coastguards on exercise, and Cooper's saddlery shop, to views of Robin Hood's Bay and Staintondale Hunt.

* When Sutcliffe took his photographs he did not keep a record of what he had taken. The Sutcliffe Gallery has identified many of the pictures which now hang there, but there is little information about the "new" photos. If you can help with identification of people or some of the more unusual settings drop into the gallery in Flowergate.