Focusing on Shirley Baker’s celebrated street scenes photographed around Manchester and Salford in the north of England, this exhibition explores her depiction of older people. Shirley Baker’s daughter, Nan Levy, who co-curated the show with James Hyman, explains: “We are now starting to see the easing of the lockdown and with that we can begin to step outside, enjoy the sunshine and play sport. Sadly our elderly folk are still advised to stay safe at home; unable to see their loved ones or enjoy simple pleasures such as going to the park. I have gathered together a collection of Shirley’s photographs taken from the mid 60s to the mid 80s; these show older people enjoying their daily lives in the community in a way that is not possible at the moment.”

Shirley Baker, once writing of her motivations, expressed a world of street life that seems like a distant memory: “I love the immediacy of unposed, spontaneous photographs and the ability of the camera to capture the serious, the funny, the sublime and the ridiculous. Despite the many wonderful pictures of the great and famous, I feel that less formal, quotidian images can often convey more of the life and spirit of the time.”

All works are for sale, subject to availability with prices starting at £1,800+VAT 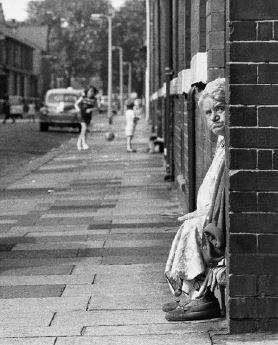 Shirley Baker (1932, Kersal, Salford–2014, Wilmslow, Chesire) is today recognised as one of the preeminent British photographers of the post war period, and one of a very small number of women street photographers in post-war England. Beginning her work in the late 1950s her pictures reveal the legacy of Bill Brandt's pioneering study of The English at Home (1938) and the Picture Post magazine photo stories of Bert Hardy, Grace Robertson, Thurston Hopkins and others. Based in the streets of Manchester and Salford,

Baker's photographs also provide a northern counterpart for the type of street photography practised in London at the same period by Roger Mayne, which also saw a focus on children. However Baker's photography has a particular, individual quality that distinguishes her work and her sensitivity to her subjects.

Baker's humanist documentary work allows an intimate look on the daily life of working class communities during the 1960s and up to the late 1970s. The black and white images find their visual power in the layers of their composition. The juxtaposition between the half-demolished grim backgrounds and the subject matter, mostly children playing and women daily life, allow an emphatic engagement. Through her devotion to a rightful representation of her subjects, allowing a level of humour in her images, Baker's photography grants visibility to the resilience of human spirit at a time of radical change for working-class communities in Northern England.

Hampered by the denial of a role for women in a man-lead industry, Baker's contribution to photography was not recognised until recent years. Her work was exhibited in multiple group exhibitions such as the Observers: British Photography and the British Scene , at the Serviço Social da Ind(SESI), SPaulo in 2012; Looking Outwards at the Oldham Gallery in Manchester in 2013; and the major exhibition: Shirley Baker. Women, Children and Loitering Men, The Photographers' Gallery, London 2015 (and tour). In 2019, a monograph of her work was published by MACK.