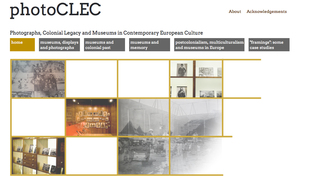 Photographs are probably the most ubiquitous and far-reaching records of the colonial past. They trace the experiences of a vast range of people touched by European colonial expansion and domination, both colonised and colonisers.How is this record understood in public histories? What is its role in the way contemporary European cultures configure their pasts for the benefit of their futures?

This new website explores the different ways in which photographs of the colonial past have been used by museums, as spaces of public history, to communicate and interpret the colonial past in a postcolonial and multicultural Europe. Intended for curators, heritage managers, teachers an students, this resources has been built in response to the concerns of curators, debates about difficult histories in museums, the role of photographs in the museum space, and especially, key questions about the representation of the colonial past in museums as vectors of public history. The resource offers a unique comparative character that is the result of a collaborative research project, funded by HERA (Humanities in the European Research Area), in the United Kingdom, The Netherlands and Norway, all of which have very different colonial histories and postcolonial engagements.