Publication: Jews and Photography in Britain 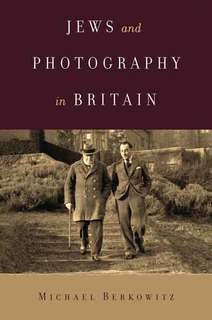 From the 1850s to the 1950s, photography was one of the most open avenues for Jews in Britain to make a living, as well as to contribute to mainstream culture. If one’s picture was snapped for a price in Britain, the person behind the lens was more than likely born a Jew. Through the 1970s, Jews were prime movers behind nearly all things photographic in Britain, including photojournalism, portrait studios, collecting, applications of photography to the fine arts, and the emergence of photography criticism and history as distinct fields. Yet despite Jews having played such remarkable roles, far out of proportion to their number and in all facets of photography, little attention has been paid to ethnic-religious difference in studies of British photography.

Richly illustrated with both color and black-and-white images, Jews and Photography in Britain is the first-ever historical investigation of this topic, ranging from the mid-nineteenth century to Queen Elizabeth’s controversial photo shoot with Annie Leibovitz in 2007. Michael Berkowitz explores subjects such as the attempts of H. W. Barnett to unsettle portrait conventions, the spectacular photo editing of Stefan Lorant, the influence of Erich Salomon on Fleet Street, the inception of the “Gernsheim Corpus” (a seminal resource for art historical research) conceived by Walter and Gertrud Gernsheim, the innovative photography practices at London’s Warburg Institute under Fritz Saxl, and the pioneering efforts at collecting and publishing about photography as history and art by Helmut and Alison Gernsheim.