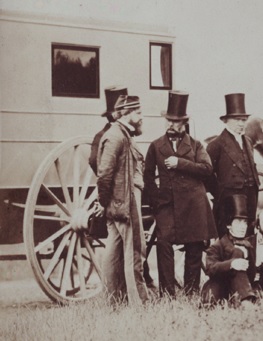 Further to my last post to the blog, I would like to add that Roger Fenton sold the photographic van he took with him to the Crimea in 1855 for £35 just before he left Balaklava to return home. However, he commissioned another when he got back to England and in the summer of 1856 set off with it to photograph landscapes in Scotland.

This new van was most likely the one that appears on an image that was taken at a Photographic Society outing to Hampton Court in 1856 (see right). While most members of the Society in the image are conventionally dressed in formal attire including top hats, Fenton on the far left wears a shabby jacket, a kepi and trousers with a stripe down the seam.

Tim Pickles, who is an expert on Crimean War uniforms, advises me that:

The kepi appears to be a standard French infantry type with a red top, a blue base and gold braid indicating a junior officer. His trousers also seem to be those of a French junior officer. They were deep red verging on crimson with a single wide black stripe. His jacket does not appear to be military, but I suspect it is the one he wore in the Crimea.

Therefore, it is likely that Fenton acquired these items during his visit to the Crimea the previous year. He probably did not wear his best clothes to the outing because he was driving his van and he also wanted to emphasis his Crimean War connections to the gathering.

The full image is below. It also found on the Royal Photographic Society's website at http://rps.org/about/history/history-of-the-rps. There is a second copy of this image which carries more annotations and attributes the image to Roger Fenton.