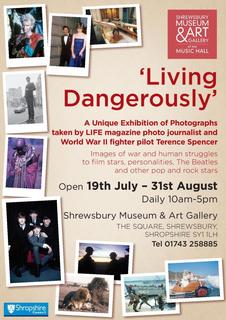 An exhibition of photography by war hero Terence Spencer is now open at the new Shrewsbury Museum & Art Gallery this summer until 31st August. With two audacious careers, first as a World War II fighter pilot and later as a celebrated photo-journalist for American magazine LIFE; ‘Living Dangerously’ will showcase the work Terry did to capture momentous events from the swinging sixties and the rise of The Beatles to the horror of conflicts in the Congo, Vietnam and Northern Ireland.

The exhibition has been curated by Terry’s eldest daughter, Cara Spencer, who was left a remarkable photo archive of over one million negatives when her father passed away in 2009. Commenting on the new exhibition, Cara says:

“Dad led quite a life. He was a combination of Biggles and James Bond all rolled into one. The show will tell the story of his remarkable life, as well as the lives of those he captured so poignantly on film. We’ll have black and white reportage photographs and huge colour images, as well as memorabilia from his time in the RAF. I’m looking forward to sharing the iconic works and hidden gems of dad’s collection with visitors to the museum”.

There will also be pictures from Rockarchive, featuring Terry Spencer’s photos of stars including Marianne Faithfull, Robert Plant, Oasis, The Police and The Smiths. Rockarchive’s founder Jill Furmanovsky says:

“Terry Spencer was a great friend to Rockarchive and contributed a collection of marvellous images, including Robert Plant striding through the woods of Herefordshire, John, Paul, George and Ringo in various settings and Bob Dylan at the Isle of Wight in his famous white suit”.

“The collection is simply amazing and I’m really proud to see such high quality exhibitions coming to the new Museum & Art Gallery. The wide variety of subjects in the collection means there is something for everyone to delve into.”

Run by Shropshire Council, the new Shrewsbury Museum & Art Gallery opened in April 2014 as the result of a major restoration project on the town’s old Music Hall, where The Beatles performed on two separate occasions in 1962/3. The ‘Living Dangerously’ collection of photographs, which takes its name from Terry and his wife Lesley’s joint autobiography, will be housed in the Special Exhibitions Gallery overlooking The Square and Old Market Hall.

The exhibition ‘Living Dangerously’ will run 19 July – 31 August. Shrewsbury Museum & Art Gallery is open 10am – 5pm, seven days a week. Admission is £4.00 per adult and £2.00 per child, which includes entry to the Special Exhibitions Gallery. Concessions are available. For more information visit www.shrewsburymuseum.org.uk