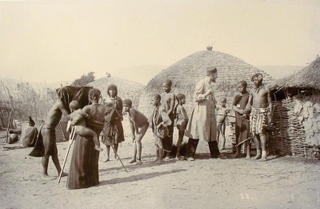 Did you know that the Mariannhill Monastery, near Pinetown (South Africa) was a fully fledged photographic studio (complete with painted backdrops for people to pose) from the 1880s to the 1930s? In the late 1890s this studio, then run by Brother Aegidius, produced an album of ethnographic photographs depicting the local Zulu people that found its way into the collections of ethnographic museums all over Europe.
It was this album that led Christoph Rippe to his interest in the monastery and its photographic record. A doctoral student in cultural anthropology at the Institute of Cultural Anthropology and Development Sociology at Leiden University in the Netherlands, Rippe is currently researching the photographs archives of Mariannhill Monastery produced since the 1880s.
The museum purchased an album of photographs — 156 in all — from Mariannhill in 1899. “In 1897 Brother Aegidius sent out letters to ethnographic museums in Europe, making them aware of the album,” says Rippe. “He produced a standard set accompanied with a pamphlet giving a detailed account of objects, the ritual practices depicted, along with the Zulu names for objects depicted in the photographs.  Most major museums in Europe have Mariannhill collections — in Britain, Germany, Switzerland, Austria, even Hungary.”

According to Rippe, these images were not just ethnographic photographs, but also used as propaganda and to raise funds for the mission as well as to foster an interest in vocations.