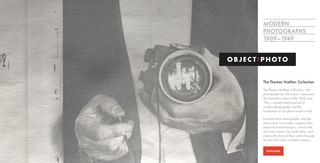 Object:Photo. Modern Photographs 1909–1949:The Thomas Walther Collection is a model for how such a collection or group of photographs can be examined and interpreted and made available to both scholars and the wider public. Other institutions should take note. Highly recommended.

I couldn't agree more. The website is an exceptional example of clear design that leads to a deeper understanding of the subject through visualizations. The website is well worthy of detailed examination.