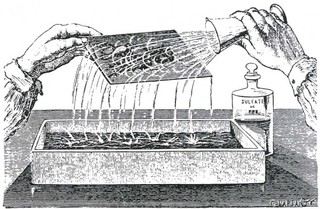 David Burder FRPS, FBIPP, BSc, has one place left on his very special, hands-on, workshop on 6 April in his North London studio. David will take participants through the many aspects (some safe, some dangerous), of Daguerreotype imaging, the cameras and actual hands-on production of an actual Daguerreotype image. It will be a very interactive experience with course members taking away up to three Daguerreotypes made on the day. Stereo Dags will also be demonstrated. This is a rare opportunity to work with a Daguerreotypist.

The cost for the day will be £350. The workshop will take place at David’s studio in North London. Contact David@3Dimages.co.uk for further information and for Workshop booking.

David is Director of 3D Images Ltd in London, and holder of a dozen 3D imaging patents. He is a Fellow Of The Royal Photographic Society, and a previous recipient of several RPS awards, including The RPS Saxby award for 3D imaging.
David is one of only a handful of practising Daguerreoptypists/ lecturers and has appeared on BBC TV, as well as in in The Guinness book of records, for creating the Worlds largest Daguerreotype. (having first had to build a 2 metre tall camera to house the 24x48 inch plate holder.)

He also created the worlds first 3D Lenticular “Dag”, as well as re-discovering the fabled true colour Daguerreotype process, which basically re-writes the early history of colour imaging. David has given several “live, hands-on” demonstrations of this  procedure at several RPS events.

As he wrote in The Daguerrian Annual, “in making Daguerreotypes, I have created many smells and met many new friends”.