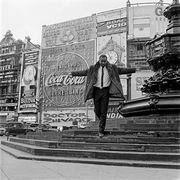 Tate Britain will hold an exhibition of 180 classic twentieth-century photographs which take London as their key subject. In the years between 1930 and 1980, some of the best-known photographers from around the world came to London to make work about the city and its communities. This exhibition will bring together some of the biggest names in international photography, to explore the ways photographers, for whom London was a foreign city which they either visited briefly or settled in permanently, saw and represented the subject in their own unique and distinctive ways. Artists represented in the show include: Bill Brandt, Henri-Cartier Bresson, Bruce Davidson, Elliot Erwitt, Robert Frank,  Marketa Luskacova, Dora Maar, Irving Penn and Willy Ronis.

RSVP for Another London to add comments!