Between the States: Photographs of the American Civil War 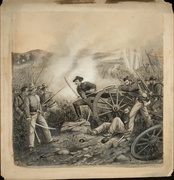 The American Civil War divided a country and created a nation. It was the first modern war and the most detrimental for Americans, yielding more American fatalities and greater domestic suffering than any other war. Yet it paved the way to a new political, economic and social landscape for the United States.

As we approach the 2011 sesquicentennial of Mr. Lincoln’s War, Between the States: Photographs of the Ameri­can Civil War presents a selection of historical photographs of Civil War sites and circumstanc­es by photographers including George Barnard, Mathew Brady, and Alexander Gardner. The exhibition emphasizes rare items in the George Eastman House collection and explores how photography was used during this period to record the war, promote popular causes, and commemorate those who sacrificed their lives.

Large portions of famous published works such as Photographic Views of Sherman’s Campaign and Gardner’s Sketchbook of The Civil War will be exhibited in addition to items only held at George Eastman House, such as the album titled The Lincoln Conspiracyand extremely rare photographs of the C.S.S. Alabama, a Confederate naval vessel. The Lincoln Conspiracy, an album compiled by the 4th Cavalry Regiment of Massachusetts Volunteers, contains wood engravings and lithographs relating to Lincoln’s assassination and the search, trail and execution of the conspirators.

Between the States also includes portraits of such Civil War era figures as Abraham Lincoln, General Ulysses S. Grant, Jefferson Davis, Sojourner Truth, Tom Thumb, Harriet Tubman, Frederick Douglass and Susan B. Anthony. The collection also abounds with portraits of soldiers, many of whom remain unidentified, but whose images remind us of the endless number of soldiers who served during this war. Other photographs feature infamous prisons, sweeping battlefields, fortress interiors, and post-Civil War memorial sites.

RSVP for Between the States: Photographs of the American Civil War to add comments!