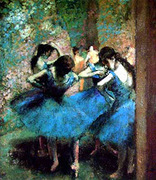 Degas Dancers: Eye and Camera will bring together 75 works comprising paintings, photography, pastel drawings and sculpture. It will hail him as an artist ahead of his time, whose work incorporated and was influenced by early film-making and photography.

The exhibition will include the Little Dancer sculpture of a 14-year-old girl alongside the artist's preparatory drawings, which were done from different angles and create the impression of the subject turning 360 degrees.

His work will be displayed alongside that of Eadweard Muybridge, the 19th century photographer, and Auguste and Louise Lumière, the French film-makers, all of whom had an influence on Degas.

The show is one of the highlights of the Royal Academy's 2011 programme.

RSVP for Degas Dancers: Eye and Camera to add comments!