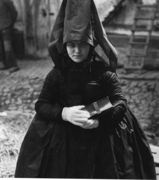 ERICH RETZLAFF (1899-1993) is a name almost forgotten in the history of photography, yet, in the early twentieth century, Retzlaff was a prolific and celebrated photographer with several major volumes of his photographs published between the two world wars. In addition to his black and white studies of German workers, landscapes and peasants, Retzlaff was one of the first photographers to use the  revolutionary 'Agfacolor Neu' colour film introduced in Germany in October 1936.

Focusing on his photographic output from the turbulent years between the nadir of the Weimar republic and the downfall of the Third Reich, this exhibition [and catalogue] examines Retzlaff’s work as part of a visual discourse that emerged from an intellectual milieu deeply affected by the parascience of physiognomy. Ideological as his work was, Retzlaff's photographs are significant as cultural artifacts from a pivotal era of social, political, and economic change in German history.