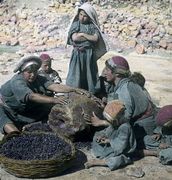 At the end of the 19th and beginning f the 20th century the American Colony photographers of Jerusalem commemorated the lives, people, and sites of Palestine. In thousands of high-quality photographs they documented the traditional daily life of inhabitants of the cities and villages, permanent residents, and wanderers. As believers they thought that they were thus opening an important window to the way of life in biblical times, concretizing the background of the biblical stories. Some of their photographs were painted by artists and sold to tourists and researchers. A selection of these photos are now shown for the first time in Israel; this exhibited was made possible by courtesy of the Jewish Historical Museum of Amsterdam.

Etan Ayalon, the curator of this exhibit, focused on photographs that commemorate people at work, at authentic moments of life at home and in the field, working in a tradition that has long since disappeared from our world. The superb photos show figures and landscapes that most likely existed thousands of years ago.

RSVP for People, Lives and Landscapes, 1898-1934: mages from the Land of the Bible to add comments!