Street Markets of London in the 1940s - Walter Joseph 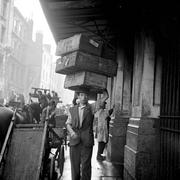 Recently acquired by the British Library, LSPF is proud to present this work to the public for the first time.

Walter Felix Abraham Joseph (1922-2003) was born in Darmstadt to an Orthodox Jewish couple. Joseph fled Germany as a young man in 1939 (his twin brothers following shortly after) and came to England. As a German national he was interned in the Isle of Man during the Second World War. After the war he was employed in newspaper photographic laboratories, but remained a dedicated amateur and semi-professional photographer for the rest of his life. These fascinating views of London markets, street traders and entertainers were taken between 1947-48.

Joseph doubted his photographic skills but his family always loved his images. Now, having been recently aquired by the British Library they will become a valued public record of the post war period and the hardships and pleasures Londoners faced. There is a striking similarity between the story of Walter Joseph and that of Vivian Maier, who's work is on display just around the corner at the German Gymnasium.

RSVP for Street Markets of London in the 1940s - Walter Joseph to add comments!