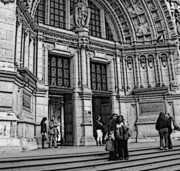 Discover the beauty of Buddhist sites in this display of sepia-toned photographs. The historical and architectural significance of ancient rock-cut caves, monumental sculptures, brick-built stupas and wooden monasteries is explored. The photographs seen here have captured picturesque ruins in remote places and unusual aspects of familiar Buddhist sites, creating aesthetically powerful images. At the same time, they perform an important documentary function, showing structures before they were restored and recording those that no longer exist.

When these images were taken, during the later decades of the 19th century, they were valued for their realistic and precise representations of architecture. They enabled scholars to study, categorise and write about Buddhist sites in a more comprehensive manner than had yet been possible. Our knowledge of Buddhist architecture is a result of this documentary process.

The display uncovers some of the highlights of the V&A's collection, showcasing the work of the photographers Linneaus Tripe in Burma and Joseph Lawton in Sri Lanka. Also included are souvenir photographs of the Longmen caves in China and a hand-tinted image of the Golden pavilion (Kinkakuji) in Japan.