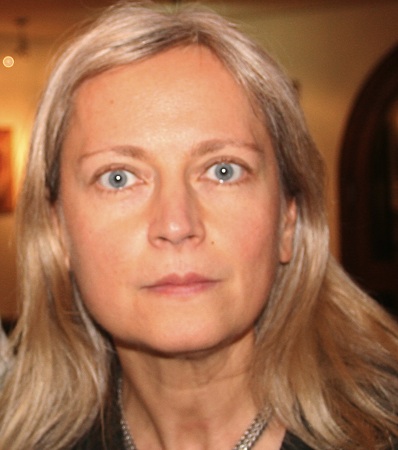 Irene Caesar has not received any gifts yet

Irene Caesar, Ph.D. is an artist-provocateur who creates absurd performances documented by photography as ideological and aesthetic subversions.  She is a mid-career artist with her artworks in four American Museums, and gallery representation all over the world.

For her publications, exhibitions, and collections, please refer to the "Archive" section of her website.  The archive has links to all the recent news, critical reviews, press releases, interview and gallery talks, including her August 2010 interview for NTV America, November and December interviews for TV3 Boston, and the photo-reportage of her November 2009 solo show at the Aragon Gallery / Orensanz Art Foundation Gallery, SoHo, NYC.

In 2010, Irene Caesar participated in two major group shows “New Vision” and “Conceptual Russian Games” at the Alexandre Gertsman Gallery, SoHo, NYC which represents her in NY, alongside such world-famous artists as Komar & Melamid, Grisha Bruskin, and Natalia Nesterova. In 2011, Irene Caesar participated in Artantique Art Fair in Utrecht, Netherlands, represented by Eduard Planting Gallery, and in the group show at the Chelsea Art Museum "Concerning the Spiritual Tradition in Russian Art," Selections from the Kolodzei Art Foundation Collection of Russian and Eastern European Art (Curated by Natalia Kolodzei), alongside such world-famous artists as Mihail Chemiakin, Komar and Melamid, Oscar Rabin, Vladimir Ovchinnikov, Dmitri Plavinsky, Ernst Neizvestny, and Natalia Nesterova:

"Madonna Liberated" and "Salvation Now" by Irene Caesar make their appearance, along a few others, in the video by the Voice of America recorded at the opening of the group show of forty artists "Concerning the Spiritual Tradition in Russian Art: Selections from the Kolodzei Art Foundation" in the Chelsea Art Museum (Apr. 14-May 5th), NY, where Irene Caesar participates with these two works: https://www.youtube.com/watch?v=LLY1LvGJn_0&feature=player_embedded

Her recent projects include "A New History of Ideas in Pictures," "Counter Portraits" and "People of Art as Objects of Art."

"A New History of Ideas in Pictures" puts to the test the major concepts of human civilization, such as human nature and the origin of man, sacred and profane, gender, social modes, etc.:

"People of Art as Objects of Art" includes conceptual portraits of art crowd, featuring "Arthur Danto with Wise Puffy Cheese Doodles".  This project validates the major art concepts of the 20th century by making some important artists and art critics enact some art concept via creating an art piece in front of the camera.  Among the participants are Arthur Danto, Vitaly Komar, Dan Cameron, John Haber, David Gibson, Larry Litt, Carter Ratcliff, and others.

2011 Interview for the Art Assassin with Qi Peng “A Portrait of the Artist as Joan of Arc, or the Ideological Provocateur: Irene Caesar, Artist Represented by Alexandre Gertsman Gallery”:

2010 Interview for Responses at Wanderlustmind:

thanks for the invitation!

I posted a few photos of some of my recent works so you can have an idea of the kind of things I do. Loved you work and I think there is quite a lot of parallel between our respective practices. My website is badly outdated, I need to redo it but... so many things to do so little time. But you can see more if you wish to by downloading the following pdf:

Michael Wong said…
Impressive portfolio and welcome to the blog!

James Downs said…
Many thanks for the request, which I am pleased to accept. I'm intrigued by the international scope of your work - have you any contacts in Hungary? I look forward to learning more about our current projects.

Massot Gilles said…
gee, quite amazing that you should be the first person requesting for my friendship in this group. I haven't posted much about my profile yet, but beside lecturing in photo history I am also a practitioner with a strong interest in performances walking the thin line between reality and fiction. In fact I just collaborated with a friend on thursday night for a lecture/performance entitled "The Malay Allocution" that  combined the topics of  the malay identity and truth/fiction in academia... small world...