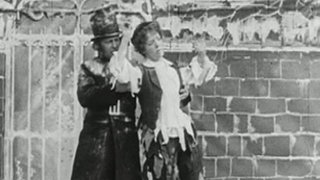 George Albert Smith was one of the most important figures in Victorian cinema. Smith saw and appreciated the Lumière programme in Leicester Square in March 1896. A group of film producers, which included Alfred Darling and James Williamson and known as the Hove Pioneers, established themselves in Brighton and Hove from 1897 onwards.

Smith was instrumental in the development of continuity editing. He knew and corresponded with Georges Méliès at this time. Méliès featured in the recent multiple Oscar winning film, Hugo.

Hove Museum has a permanent display on Smith, as well as Williamson.